After the closing date being pushed back twice, tons of crazy paperwork, selling our house, and a U-Haul with a bad transmission we are finally moved!!!!

Matt started work Monday so I have spent a lot time unpacking and talking to the dogs. Here are a few pictures! 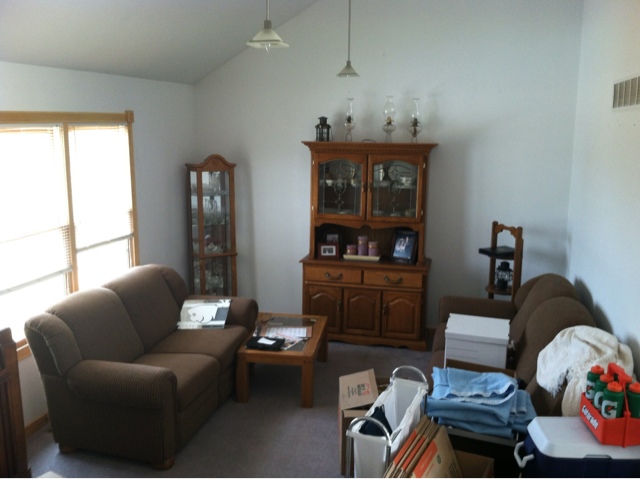 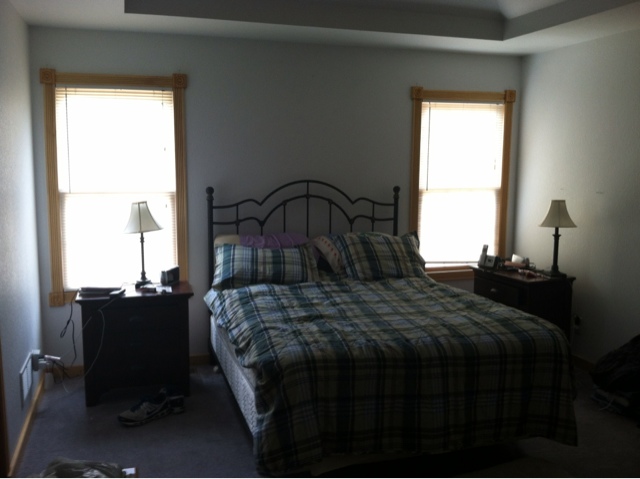 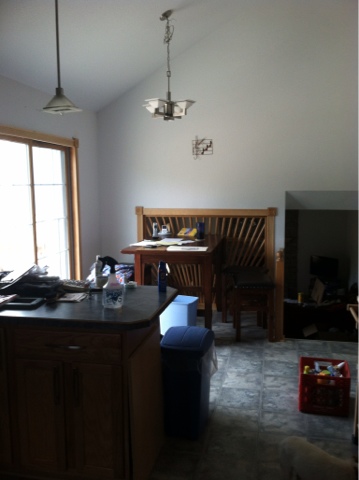 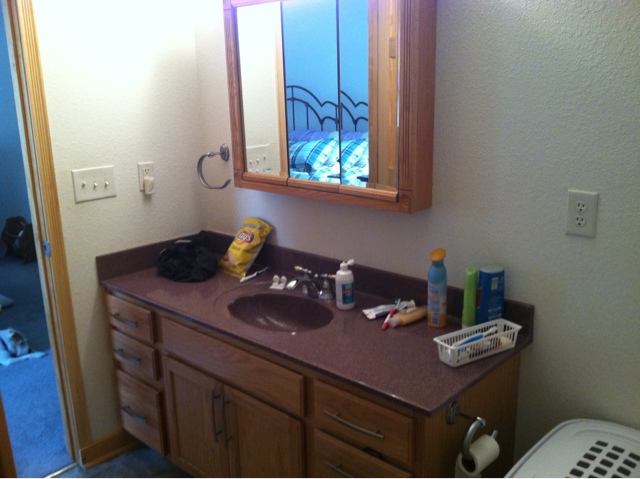 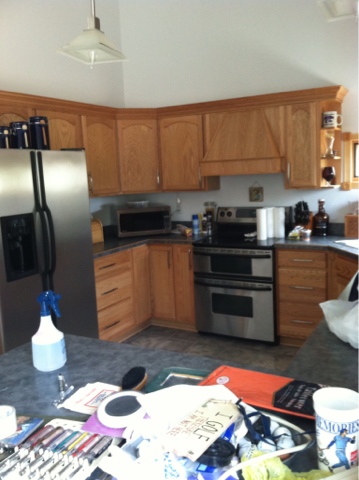 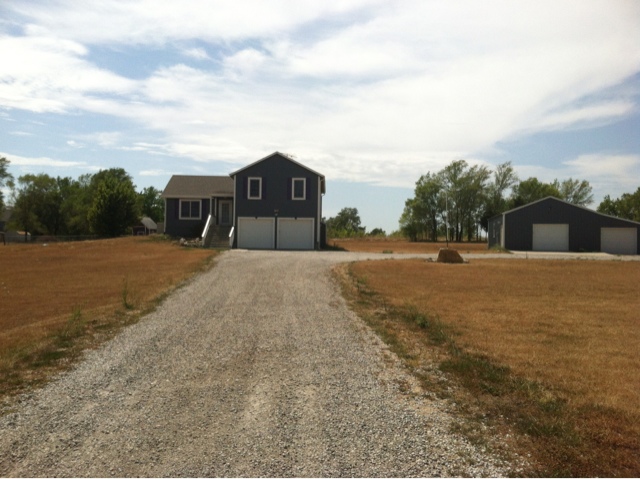 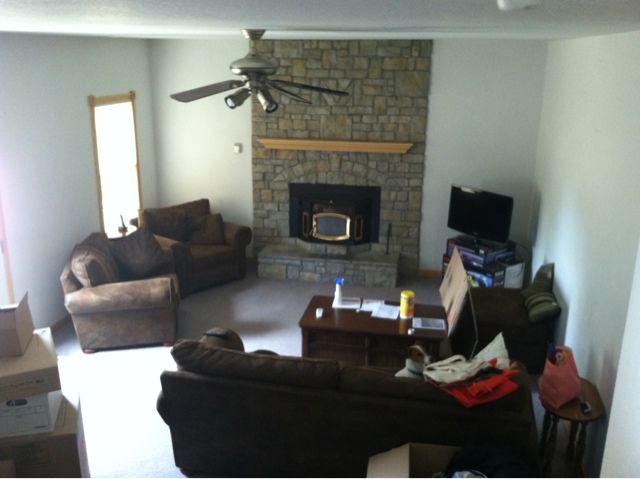 Posted by kbrenz at 4:28 PM No comments:

Your laugh for the day


If you have not seen this State Farm commercial, you are missing something funny!!
Posted by kbrenz at 8:57 AM No comments:

I am one of those people who like to have a plan.  So when I am forced to just sit and wait for other pieces of a puzzle to fall into place I tend to get a little antsy.  For example....the closing date on our new house was supposed to be July 12.  Right now we are still waiting on the paperwork from the mortgage company to go through.  Most of my house is boxed up.  So now I am just waiting......
Posted by kbrenz at 8:26 AM No comments:

Wheat harvest this year was freakishly early. We finished cutting on June 6 which is completely unheard of. No one could remember starting as early as June 6, let alone being completely done! Unfortunately, this meant that cutting started on Memorial Day and the guys cut about two and a half days without me since I was in Manhattan working with the State FFA Band. There were a few small rain showers that kept us out of the field but once we got going there were only two days of cutting left. As I was heading back to the field the first night, I noticed that the fuel gauge was wavering between a quarter tank and empty. I radioed my dad to ask if I shod be concerned and he assured me that there was plenty of fuel.

The next morning we were greeted by a crooked combine in the shed. Dad had a flat tire and while we were waiting on the tire guy to fix the problem, Dad told my uncle that I was concerned about the fuel level. We walk over to the semi and he pulls a twig out from behind the driver's seat and sticks it into the tank (highly scientific method I know). "Oh, you can run all day on this," says my Uncle. If he's not worried, I guess I'm not worried.

Now I'm sure you can already guess where this heading. We move to our last field. I take a load or two to town. My aunt comes out and asks if she can ride with me to town, so off we go. As we are heading down the road after about a half mile, I notice that I'm not speeding up. I managed to kind of get the truck off to one side of the road before bells and whistles start going off and the engine dies. I look at my aunt hoping she will volunteer to call my uncle because this is not a phone call I wanted to make. The conversation went something like this:

So we sat, we got the truck past us and Uncle ended up going to town to get fuel and got me going. He ended up just going to town with me in case there was another problem while Dad finished the field.

I am smart enough to know that saying I told you so was not a wise decision. I did ask my uncle what he wanted me to do with the twig.......he said I could throw it in the ditch. I'm guessing that when I drive again I will have a full tank but I left the stick as kind of a reminder.

Never a dull moment!! That's why I love harvest!! 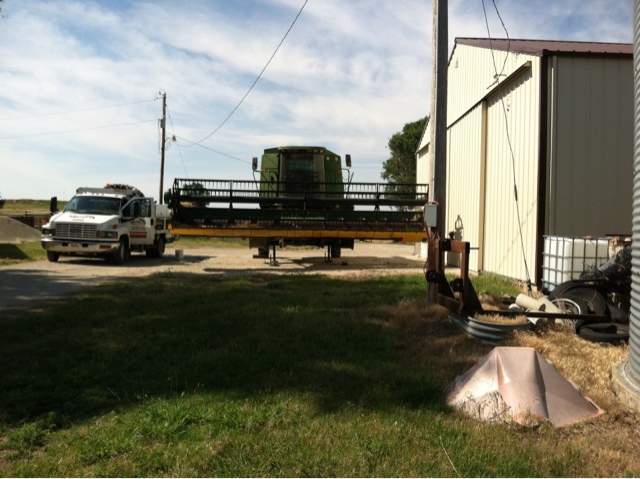 Posted by kbrenz at 4:13 PM No comments:

I know it has been forever since I have posted anything. Sometimes life just gets in the way sometimes. The other day a former band mom stopped me at the local convince store and wanted to know if I had any new harvest stories to post. Much to my uncle's dismay,I actually do. I will try to get those up but I must catch up with what has been going on. We are in the process of buying a house and moving. We both have new jobs to look forward to for next school year so things have been a little crazy to say the least. Anyway, I will try to keep you updated with the details of the move and the new job! And Mary, I hope you enjoy this year's harvest story!!!!!!!!!!
Posted by kbrenz at 3:42 PM No comments:

when you combine toys and 6 hours of sitting listening to one person talk......... 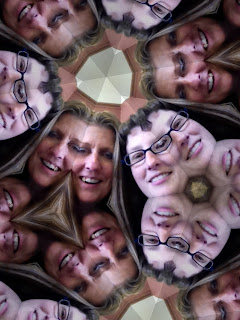 Posted by kbrenz at 7:27 PM No comments:

Yes, I know it has been awhile.  Things have been pretty hectic and I feel like I haven't hardly had anytime to sit down, let alone blog.  The past month has kind of seemed like one long perpetual meeting.  If I'm not sitting in a meeting, then I'm driving to a meeting, or typing up minutes from a meeting.  Also, who can forget the annual start of basketball season sickness which I think the hubby and I have been passing back and forth to each other.

With Thanksgiving coming up, I have been trying to hold fast to my rule of no Christmas music until after Turkey Day.  It has been tough.  The kids are already requesting the YouTube video of all the animals singing Deck the Halls.  I just need to make it through one more day of begging and we should be in the clear.  We will probably head south on Thursday since hubby has basketball practice the other days.

This time of year also includes one of my least favorite tasks, the making of the Christmas list.  I keep asking for the same thing every year and I still haven't gotten it.  I would just like to have the house done, without me having to rip out any more lathe or plaster.  I really don't need much, although All Star tickets for next year would be nice.  Can Santa bring you motivation????

The second job of being a college professor has been interesting.  Of the 26 I had enrolled for this semester, I forsee may 8 actually finishing the class.  Between the emails about why their financial aid money has not been released to wondering if the singing of the National Anthem at a Chiefs game would count as concert attendance it has been interesting.  Really people???

Well, since the doctor told me told that my sinus affliction is most likely viral and just needs to run its course, I suppose I should wrap it up.  I did get to have my first nasal spray experience and while it has helped, everything thing is tasting like snot right now (okay, that was maybe TMI).  Happy Thanksgiving!!!
Posted by kbrenz at 7:22 PM No comments: